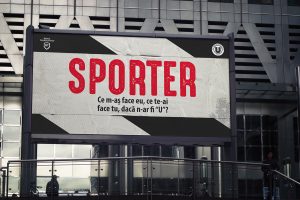 This is the most famous chant of the University Cluj fans, whom any person from Cluj has heard at least once in a lifetime.

Each team is made up of players and those who support them. Both halves form a whole. Being a supporter means that you are part of a community where people are united by the desire to manifest their enthusiasm and love for the team.

For U supporters, the team means community, strength, courage, and sportiness. Over time, U managed to spark the admiration of all people and to unite them, in black and white, in one place: in the tribune at the match.

The aforementioned chant calls for a simple thing: in which direction will our desire to belong to a group, to channel our love for a sports team, to support our city in sports competitions go if Cluj University would disappear? But what does this mean for others, those who are not supporters of “U”? How can we make them understand how important “U” is in supporters’ lives?

Banca Transilvania is the main supporter of the U-BT club and U-Banca Transilvania senior team. We chose to join them and help them show that U is part of the athletic DNA of Cluj’s people. We did this through Creative concept, OOH, Advertising production, DTP.